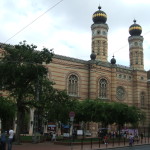 The synagogue was built between 1854 and 1859 in the Moorish Revival style, with the decoration based chiefly on Islamic models from Nort Africa and medieval Spain (the Alhambra).

The synagogue’s Viennese architect, Ludwig Förster, believed that no distinctively Jewish architecture could be identified, and thus chose “architectural forms that have been used by oriental ethnic groups that are related to the Israelite people, and in particular the Arabs”. The interior design is partly by Frigyes Feszl.nike dunk high black leather chair for sale | Air Jordan Release Dates 2020