Hungarian food and cuisine plays a significant role in Hungarian culture, and Hungarian people takes pride in it. Our dishes have an unique and characteristic flavour, which can be unusual for the visitors at first time.

The component of traditional Hungarian dishes are meat, dairy products, fresh fruits and vegetables, bread and honey. There are many fishes and games in Hungarian cuisine especially at holidays.

The early Hungarian cuisine had been very developed and creative. In Europe the Hungarians were the first who preferred the process of cooking instead of roasting. The common foods were made of mutton and poultry besides of that the beef and pork.

The Hungarian cuisine improved and changed a lot by the influence of the surrounding people after the settlement in the 10th century: first Slavish, later Bavarian and Saxon cuisines implied a significant change. Besides of that, Greek people had influences on Hungarian cuisine as well.

In 15th century Italian cooks moved to Hungary and they made a lot of gastronomical innovation. Later Hungarian traditions had been presented in Transylvania.

The 5 times eating – breakfast, snack, lunch, tea-time, dinner – became popular instead of 3 times eating. Every eating has its special food which are likely combined by Hungarians. 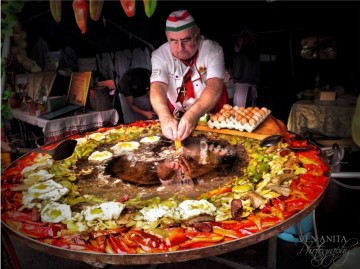 Thinking about Hungarian cuisine, the first course that comes to mind is the goulash, which is unlike anywhere else in the world – not a main course, but “only” an artistically prepared, rich soup. Besides stew, you should definitely try fish soup, paprika chicken and steak with a sauce of peppers, mushrooms, peas and chicken liver.

The most famous and traditional Hungarian food are

The desserts deserve a separate book, as the Hungarians are the champions of making them. The most delicious ones are strudels made of thin dough and Gundel pancakes – the pancakes are filled with a walnut-raisin cream, covered in chocolate and then flamed with brandy.