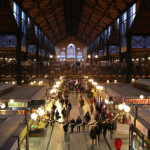 The Great Market Hall was built from 1894 to 1897 by the plans of Samuel Petz. The basilica-like building with a nave and two transepts is based on a steel structure, which is clothed in the facade with colorful, glazed tiles of the Zsolnay porcelain factory. At the corners of the building are large, heavy towers. The entrance from the Small ring is decorated with columns and figures. Originally, a channel of the Danube ended in the market hall to facilitate the delivery of goods. On three floors are over 180 market stalls and shops, and two supermarkets. The upper floor has souvenir shops, snack bars and a bistro.