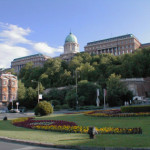 The Castle District is the best place for romantic walks in Budapest. Visitors will find a medieval town here with atmospheric streets, old houses and beautiful monuments. The main street of the neighborhood – the Tárnok utca begins at Disz tér and leads up to the Matthias Church. It is also the location of the Budapest Hilton hotel, perhaps the most beautiful building of the chain, whose wings hide the remains of a medieval abbey, used as a Jesuit college from the 17th Century. In the foyer there is a milestone accidentally found during construction works, which once marked the border of the Roman Empire.